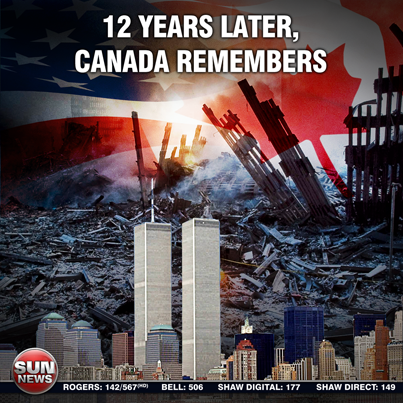 More Than a Memorial Day:


September 11 is more than a memorial day for the thousands who perished, including a friend of this writer, a passenger on American Airlines flight 77, the Pentagon plane. Potential victims might also observe what has not happened on September 11 in the following 12 years.
More >>>
h/t Blazing Cat Fur

Check out this video report by iPhone Conservative. Among other things, iPhone Conservative takes time to explain how the policy of multiculturalism blends together with cultural relativism and political correctness. P.S. If you don't like graphic evidence, you better fast forward from 12:20 to 13:00.

And here's a great article about multiculturalism in Sweden and its consequences:

When I grew up our prime minister was Tage Erlander, a Social Democrat. In 1965 he said in parliament, after violent race riots in America:

"We Swedes live in a so infinitely happier situation. The population in our country is homogeneous, not just according to race but also in many other aspects."

Now I live in a nation that is not homogenous in any respect. Olof Palme that came after him decided that homogeneous was a bad thing and opened up our borders for people from all over the world. And from right to left the politicians told us that there was no such thing as a Swedish culture, no Swedish traditions worth mentioning and that we Swedes should be grateful that so many people with REAL culture and REAL traditions came to us.
...
In 1990 the authorities counted to 3 exclusion areas in Sweden, suburbs where mostly immigrants live, where very few have a job to go to, almost all of them live by welfare and the children don’t pass their exams. In 2002 they counted to 128 exclusion areas. In 2006 we had 156 and then they stopped counting. In some cities, like Malmo where I live, a third of all inhabitants live in an exclusion area.
...
In the New Sweden we need armed police officers at our hospitals because rivalling families fight each other in the hospital rooms. They gun each other down in open streets and they rob and beat old people up. The crime rate grows by the minute, but the Swedish politicians and journalists tell us that is has absolutely nothing to do with immigration. The fact that our prisons are full of foreign people is just a coincidence or is explained by socio-economic factors.
...
The situation in Sweden is far worse than in Denmark. In Sweden NOBODY talks about immigration problems, the death of the multiculti project or the islamisation/arabisation of Europe. If you do, you will immediately be called a racist, an Islamophobe or a Nazi. That is what I have been called since I founded the Free Press Society in Sweden.
More >>>

Socio-economic factors may have a lot to do with why home schoolers do so much better. Virtually all have a mother and a father who are living together. Nearly two thirds of fathers and 62 percent of mothers have a bachelor’s degree or higher.

The explosive growth in home schooling has been fueled by dissatisfaction with public schools.

We spend more per pupil than any other country, but among industrialized nations, American students rank near the bottom in science and math. Only 13 percent of high school seniors knew what high school seniors should know about American history, says the National Assessment of Education Progress. Half of 18 to 24 year olds in a National Geographic Society survey couldn’t locate New York state on a map.
More >>>